A few weeks after the release of its 2018 data set update for USM98-99,  Dane Smallbone provide us this time with an advanced tutorial to help you to get the better from your young players… without cheating, just with science and practice.

This tutorial completes the previous ones, giving to everyone a complete overview of one of the most exciting feature of the game.

The new version of the USM Tweaker has been released.

Two features have been added to this release:

A full documentation is available inside. You can find the Tweaker in the download section.

The USM explorer has been released. This new helper provides many features to explore and edit data of the game (Players, teams…).

The new version of the USM tweaker is available.

It includes :
– the possibility to change how many teams are promoted/relegated in the french and italian leagues
– the feature to rename the European Cup and the UEFA Cup to their (pretty much) real name.

The next releases will include:
– the feature to rename the french and spanish league to their real name.

The USM 98-99 Tweaker version 1.1 has been released today. It only contains the possibility to disable the fact that you can be fired if you get
bad sports or financial results.

All the other planned features will be released in a further version.

Today Lord Shiva shares some interesting results of his research.

In a previous post, I introduced you how to use the cheat engine with a simple example. Today, let’s go to the next level: editing players and the team level while the game is running. The below topic is written by Lord Shiva.

WARNING: remember to make a backup of your savegame before editing it with the below instructions.

a) Find the player you wish to edit, I will use a player from my team (Barnet) as example. 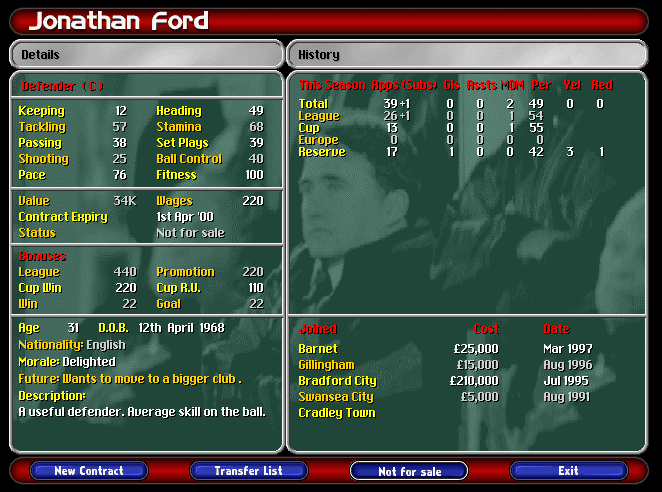 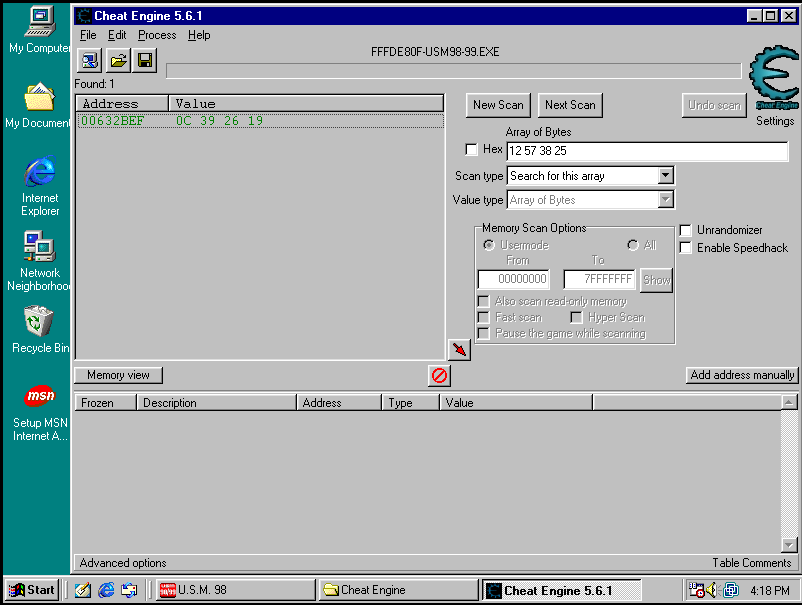 c) Right click on the search result and click ‘browse memory region’, here you will see the code for the player, i have highlighted in red the code for Jonathan Ford 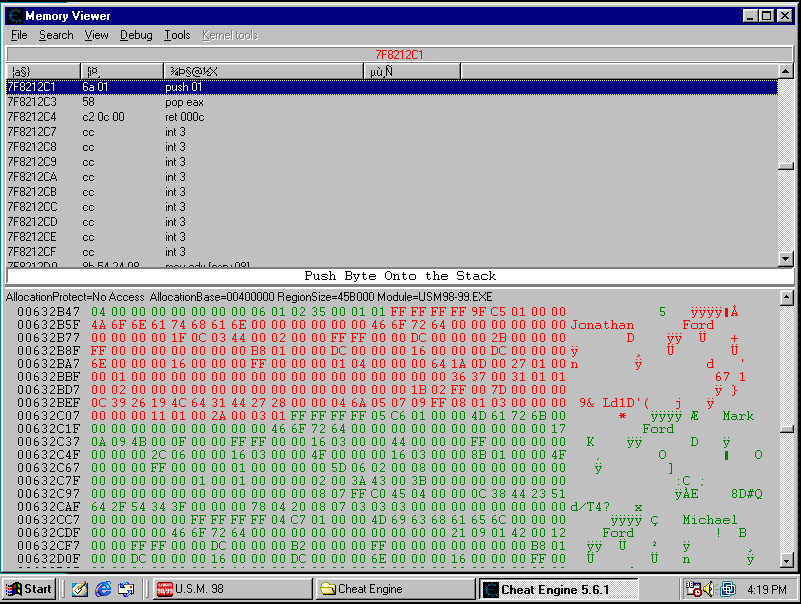 d) Edit the player, I gave you 100 as example and change your name 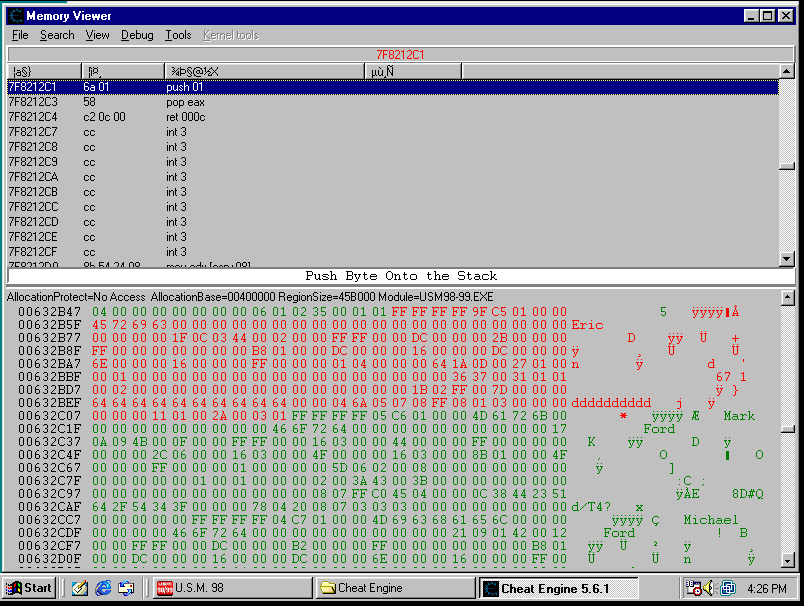 e) Return to game and change the screen and go back to the player
100 value will reduce to 99 when you progress in game. 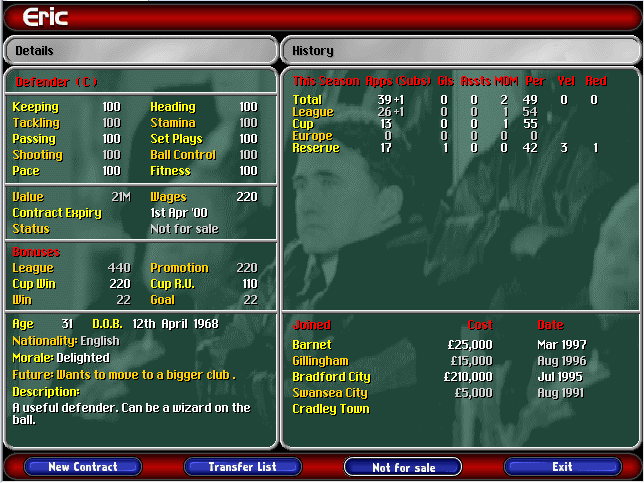 Just for your information, you can see in the below picture the mapping of the players differents values and skills: 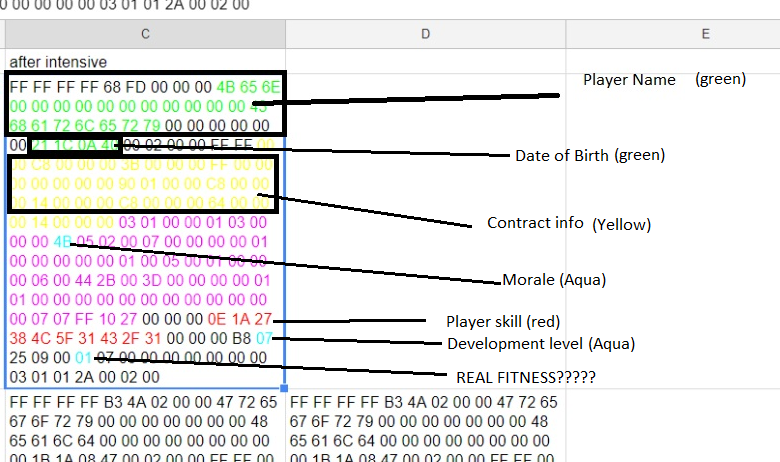 Changing the team skills is much easier thanks to the file created by Lord Shiva.
First, download it here.
Then, unzip the file inside your Cheat Engine folder.
After that, just click on the open button of the Cheat Engine, and load the file you unzipped (Training.CT). 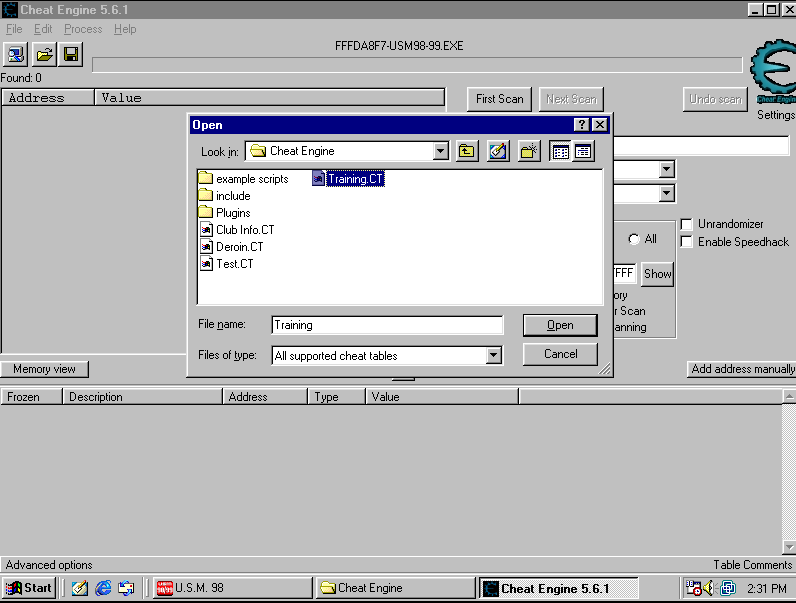 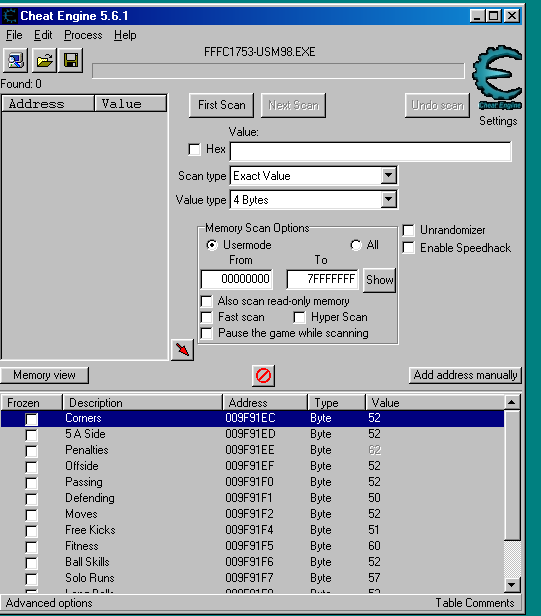 As we learned in our first topic about the cheat engin (see above), you can edit the value of each training field in the below part of the screen. When done, you can go back to the game, go back to the training screen and see the results. 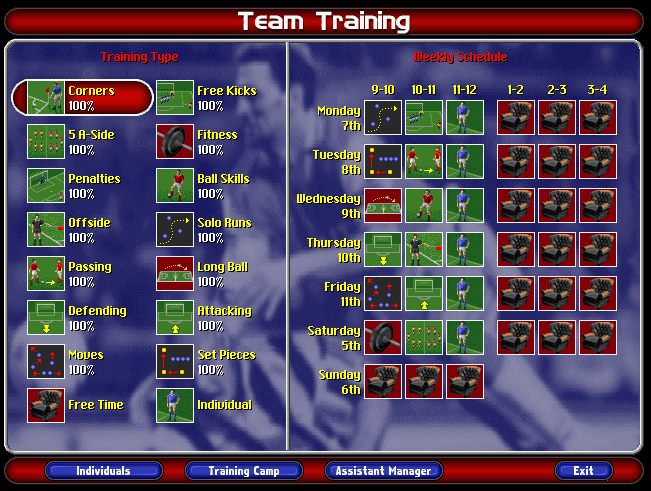 Good news today: the first version of the USM 98-99 Tweaker is available in the downloads section. It includes some very interesting features plus a beta feature to edit players inside a savegame.
A small but clear documentation is inside the archive, so read it carefully. You can contribute to the project by signalling any bug or asking questions you didn’t find the answer in the documentation.

Thanks to all the contributors!

Dane Smallbone just released his data set including all the teams and players of the 2016/17 season. Available in the download section.

During the last few weeks, I have been posting regular screenshots about a future patching/editing tool for Usm98-99, a tool which was already under development.

As the release date is coming – a couple of weeks I think, it is time to clearly annonce what it will contains.

As everything is ephemeral, our website, ou computer, our life… I decided to publish the source code of the Tweaker under the MIT licence terms, and make it freely available on Github.

It will enable, first of all, to assure the safety of the source code in a case I would no longer be the capacity to continue this work, and also to enable other people to signal bugs through a standardized procedure, to take the lead, or even create their own version with my work as a base.

Another word: the tweaker is programmed in Java. This language offers a huge advantage: if properly used, it is cross platform. In other words, if you are playing USM98-99 on Windows, Linux or Mac OS, there will be no problems for you to use this tool.

It stands for Read This F… Manual. An acronym that we, in the computer industry, are very familiar with. The USM Tweaker will be delivered with a short but clear and concise manual, which will contains:

The first release, the version 1.0.0, in february 2017, will include the following features:

The tweaker patching section is designed to work on the english version of the USM 98-99 game. A feature of the tool will help you to check if you have the good one. However, it won’t be compulsory, and you will be free to try to patch a different version, as for someones there is probably only the translation which changes.

The savegame editing section is not impacted: you can use it with every version.

In a two or three weeks interval following the initial release, a 1.0.1 version will be issued correcting (if possible) the reported bugs, if there are ones.

I have great expectation for this one, as it will prevent computer-managed squads to change half of the team during the season, and hence reducing the huge quantity of transferts, decreasing the risk of savegame crash because too much transfers have been processed.

If you have any idea of new feature we could try to implement in the tweaker in a future release, do not hesitate!

I however gently remind that as we don’t have the game source code (read here) , we can only try to modify the game, not add new stuff (leagues for example).

… or with less leagues we should say.

As you know, we managed to get access to the cheat menu of the game, a feature that nobody has been aware of almost 20 years after the game realease.

It is impossible to know if it was a hidden of development purpose feature, and we are all happy (I guess) that it will be available to everyone soon.

Another things we found while working on USM98: the mention of leagues (French third level : National and Italian third level: Serie C1 for example) that are not in the games, but where in the USM2 version.

This lead to this assumtpion : perhaps it was planned at the beginning but time was running out and it was cancelled.